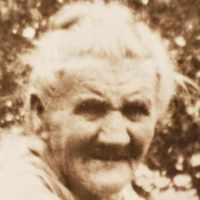 Johanna Anderson was born in 1846

She traveled with the William Budge Company and arrived in SLC in October of 1860. She was 14 at the time.