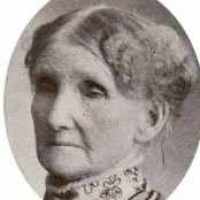 This couple joined the Church of Jesus Christ of Latter Day Saints in England and stayed faithful all their lives.