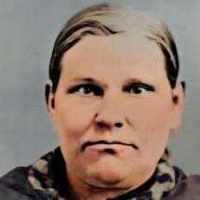 When Martha Bolton Parker was born on 23 January 1820, in Mountain, Dundas, Upper Canada, British Colonial America, her father, Richard Bolton, was 23 and her mother, Lucy Boyd, was 17. She married Samuel Allen Wilcox on 17 January 1838, in Mountain, Stormont Dundas and Glengarry, Ontario, Canada. They were the parents of at least 7 sons and 5 daughters. She lived in Franklin Township, Fremont, Iowa, United States in 1860 and Cedar Fort, Utah, Utah, United States for about 10 years. She died on 24 January 1912, in Wardboro, Bear Lake, Idaho, United States, at the age of 92, and was buried in Cedar Fort, Utah, Utah, United States.