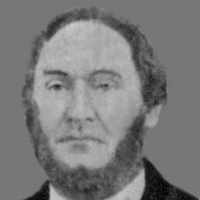 The Life Summary of Zephaniah

When Zephaniah Jones was born on 21 September 1824, in Pontypool, Monmouthshire, Wales, United Kingdom, his father, John Jones, was 30 and his mother, Jemima Davies, was 24. He married Amy Amelia Morris on 5 July 1845. They were the parents of at least 3 sons and 3 daughters. He lived in Mynyddislwyn, Monmouthshire, Wales, United Kingdom for about 10 years. He died on 11 June 1883, in Malad, Oneida, Idaho, United States, at the age of 58, and was buried in St. John, Oneida, Idaho, United States.

Put your face in a costume from Zephaniah's homelands.