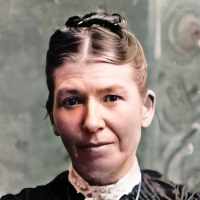 The Life Summary of Deseret Rosetta

When Deseret Rosetta Collings was born on 28 January 1852, in Deptford, Kent, England, United Kingdom, her father, James Collings Sr., was 39 and her mother, Elizabeth Bewick, was 38. She married John Thomas Rich on 18 November 1872, in Salt Lake City, Salt Lake, Utah, United States. They were the parents of at least 5 sons and 1 daughter. She died on 27 January 1937, in Paris, Bear Lake, Idaho, United States, at the age of 84, and was buried in Paris Cemetery, Paris, Bear Lake, Idaho, United States.

Put your face in a costume from Deseret Rosetta's homelands.