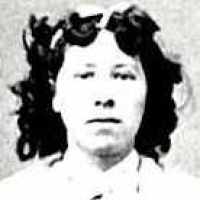 The Life Summary of Elizabeth Rebecca

When Elizabeth Rebecca Arbon was born on 4 August 1856, in Graveley, Cambridgeshire, England, United Kingdom, her father, John Cavelor Arbon, was 42 and her mother, Rebecca Dennis, was 44. She married Cyrus William Robbins on 14 October 1872, in Salt Lake City, Salt Lake, Utah, United States. They were the parents of at least 2 sons and 4 daughters. She immigrated to New York City, New York, United States in 1864 and lived in Graveley, Huntingdonshire, England, United Kingdom in 1861. She died on 4 April 1883, in Malad, Oneida, Idaho, United States, at the age of 26, and was buried in Snowville, Box Elder, Utah, United States.

Put your face in a costume from Elizabeth Rebecca's homelands.

Emigration from England to Utah

Elizabeth Rebecca Arbon emigrated from England at the age of 7 with her parents John Cavelor Arbon and Rebecca Dennis Arbon and sister Esther. They set sail on the ship The Hudson on 3 Jun 1864 and ar …