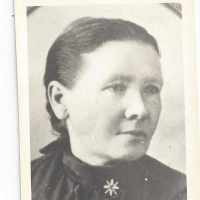 Put your face in a costume from Caroline Catharine's homelands.

Caroline Olsson was born in Lund, Sweden Sept. 24, 1847. She was the only child and daughter of Hannah Nilsson and Oke Olasson. At the age of 14 years they left Sweden for Liverpool, England and fro …