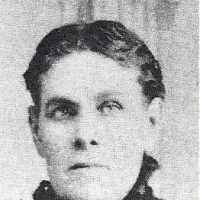 When Elizabeth Hardcastle was born on 28 February 1840, in Ripon, Yorkshire, England, United Kingdom, her father, Samuel Hardcastle, was 39 and her mother, Hannah Pollard, was 33. She married John Evans on 24 July 1858, in Utica, Oneida, New York, United States. They were the parents of at least 5 sons and 7 daughters. She lived in Bedale, Yorkshire, England, United Kingdom in 1851 and Utica, Oneida, New York, United States in 1855. She died on 20 December 1922, in Salt Lake City, Salt Lake, Utah, United States, at the age of 82, and was buried in Murray Cemetery, Murray, Salt Lake, Utah, United States.