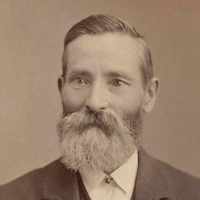 The Life Summary of Jonas Eliasson

When Jonas Eliasson Lindberg was born on 7 June 1833, in Tegen, Dalskog, Älvsborg, Sweden, his father, Elias Bryngelsson, was 41 and his mother, Elin Jacobsdotter, was 38. He married Mary Jacobsdotter on 22 April 1862, in Hamburg, Germany. They were the parents of at least 2 sons and 3 daughters. He lived in Ör, Älvsborg, Sweden in 1833 and Utah, United States in 1870. He registered for military service in 1865. He died on 1 January 1897, in Tooele, Tooele, Utah, United States, at the age of 63, and was buried in Tooele City Cemetery, Tooele, Tooele, Utah, United States.

Put your face in a costume from Jonas Eliasson's homelands.

Written by his son, John Alfred Lindberg, 14 November 1920 Jonas Eliason Lindberg was born 7 June 1833 at Dalskog, Elfsborg, Sweden. He was the tenth child of a family of eleven children for to Elias …