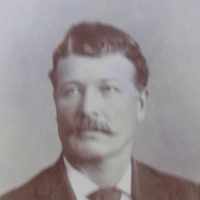 The Life Summary of John Willard

Put your face in a costume from John Willard's homelands.

English (Lancashire and Yorkshire): habitational name chiefly from High Ryley in Accrington (Lancashire) and Riley in Kirkburton, which was in the manor of Wakefield (Yorkshire). In some cases the name may derive from Riley Farm in Eyam (Derbyshire), Royley in Royton (Lancashire), or Rylah in Scarcliffe (Derbyshire). The placenames all come from Old English rȳge ‘rye’ + lēah ‘woodland clearing’.Irish: from Ó Raghailligh ‘descendant of Raghailleach’, Old Irish Roghallach. This is the name of a chieftain family in Cavan, related to the O'Rourkes. In Anglicized form it has also been confused with Ó Raithile found in Munster, usually Anglicized as O'Rahilly or Rahilly . See O'Reilly .

Sudden Death John W. Riley, the well-known depot policeman, died very suddenly of neuralgin of the heart, at 8 p.m. Saturday, November 10th, He was in his usual health and ate a hearty meal at supper …