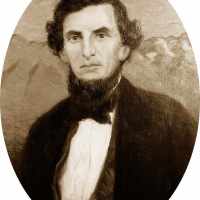 The Life Summary of Horace Sunderlin

Put your face in a costume from Horace Sunderlin's homelands.

"Horace S. Eldredge, who presided over the LDS branch in St. Louis and managed emigration preparations for several years, visited Nauvoo on 28 July 1853, staying at the Mansion House. His afternoon st …