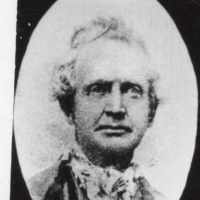 English: from the Middle English personal name Lamb, a pet form of Lambert .

English: nickname for a meek and inoffensive person, from Middle English lamb, or a metonymic occupational name for a keeper of lambs. See also Lamm .

Irish: shortened Anglicized form of Gaelic Ó Luain ‘descendant of the warrior’, formerly Anglicized as O'Loan (see Lane 3). MacLysaght comments: "The form Lamb(e), which results from a more than usually absurd pseudo-translation (uan ‘lamb’), is now much more numerous than O'Loan itself.".

ABEL LAMB Life Sketch Abel Lamb was born April 9, 1801, at Rowe, Massachusetts. He was the son of Aeneas Lamb and Ann Blackmore. In 1826, he married Almira Merrill who was born in Hartford, Connecti …

Put your face in a costume from Abel's homelands.