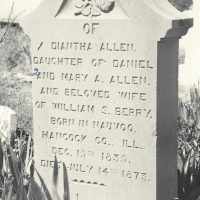 The Life Summary of Diantha

Put your face in a costume from Diantha's homelands.

William Shanks Berry was killed while on a LDS Mission by a mob in Tennessee 10 Aug 1884. Son of Jesse Woods Berry and Armelia Shanks He married Diantha Allen on 15 Oct 1864 in Salt Lake City, Salt …