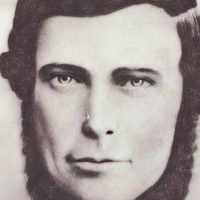 When Alexander Fiddes Greig Sims was born on 14 November 1835, in Oldmeldrum, Aberdeenshire, Scotland, United Kingdom, his father, Thomas Sims, was 35 and his mother, Mary Jane Innes, was 37. He married Elizabeth Eldortha McDermott on 26 April 1861, in Grahamstown, Cape Province, South Africa. They were the parents of at least 7 sons and 6 daughters. He lived in Huntly, Aberdeenshire, Scotland, United Kingdom in 1851 and Bountiful, Davis, Utah, United States in 1880. He died on 13 June 1893, in Garden City, Rich, Utah, United States, at the age of 57, and was buried in Fish Haven, Bear Lake, Idaho, United States.

Put your face in a costume from Alexander Fiddes Greig's homelands.

English (southern):variant of Sim , with genitival or post-medieval excrescent -s.topographic name for one who lived or worked at the house of someone called Symme (Simon).