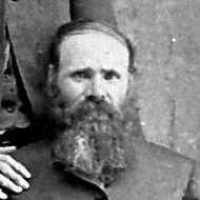 When John Alma Lewis was born on 22 August 1835, in Liberty, Clay, Missouri, United States, his father, James Stapleton Lewis, was 21 and his mother, Anna Jones, was 24. He married Waighty Celecta Lewis on 23 January 1866, in Coalville, Summit, Utah, United States. They were the parents of at least 2 sons and 5 daughters. He died on 3 September 1919, in McCammon, Bannock, Idaho, United States, at the age of 84, and was buried in Pleasant Hill Cemetery, Cassia, Idaho, United States.