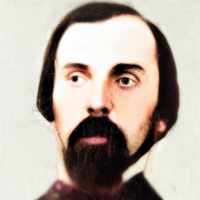 When David Bennett was born on 31 July 1829, in Horbury, Yorkshire, England, United Kingdom, his father, Charles Bennett, was 22 and his mother, Charlotte Jagger, was 23. He married Mary Elizabeth Garnett on 9 July 1851, in Bradford, Yorkshire, England, United Kingdom. They were the parents of at least 3 sons and 7 daughters. He lived in St. Louis, St. Louis, Missouri, United States in 1860 and Utah, United States in 1870. He died on 3 June 1875, in Bloomington, Bear Lake, Idaho, United States, at the age of 45, and was buried in Bloomington Cemetery, Bloomington, Bear Lake, Idaho, United States.

English: from the medieval personal name Benedict , from Latin Benedictus ‘blessed’. In the 12th century the Latin form of the name is found in England alongside versions derived from the Old French form Beneit, Benoit, which was common among the Normans. The surname has also been established in Ireland since the 14th century.

German: from a short form of the personal name Bernhard .

Altered form of French Benet or Bennet or of some other similar (like-sounding) French surname. Altered ending reflects the Canadian and American French practice of sounding the final -t.

As related by her daughter Nora to others and with some additional information. David and Mary Garnett Bennett, natives of Yorkshire, England, joined the Church of Jesus Christ of Latter-Day Saints i …