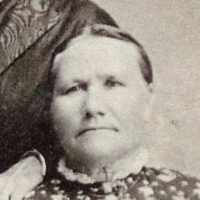 When Rose was a very little girl (around 2 years old), one day the Indians rode up on their horses to their house. This would have been around the year 1880 and more than likely before the Indians wer …