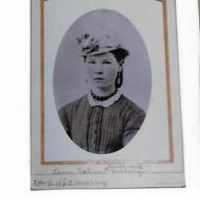 The Life Summary of Laura Salina

Put your face in a costume from Laura Salina's homelands.

Laura Salina Southworth was born 18 June 1852 in Council Bluffs, Pottawattamie, Iowa to Chester and Mary Byington Southworth.  Her parents had joined the Church of Jesus Christ of Latter-day Saints o …