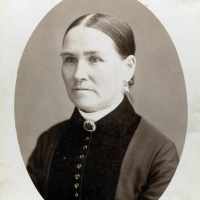 When Julia Stratford was born on 20 September 1839, in Maldon, Essex, England, United Kingdom, her father, George Stratford, was 31 and her mother, Eliza Barwell, was 29. She married William Budge on 24 November 1856, in St Giles without Cripplegate, London, England, United Kingdom. They were the parents of at least 7 sons and 5 daughters. She died on 27 September 1912, in Pocatello, Bannock, Idaho, United States, at the age of 73, and was buried in Logan Cemetery, Logan, Cache, Utah, United States.

English:habitational name from any of various places called Stratford, for example in Bedfordshire, Buckinghamshire, Middlesex, Northamptonshire, Suffolk, Warwickshire, and Wiltshire, from Old English strǣt ‘Roman road’ (see Street ) + ford ‘ford’.habitational name principally from Strafford Sands (now lost) in Mexborough (Yorkshire), presumed to be the ancient meeting-place of Strafforth Wapentake, and deriving from the same source as 1 above.