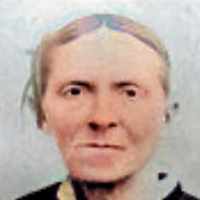 The Life Summary of Charlotte Elizabeth

When Charlotte Elizabeth Poulton was born on 10 April 1818, in London, Middlesex, England, her father, John Poulton, was 32 and her mother, Ann Heath, was 33. She married Joseph Richard Humphreys on 18 November 1842, in Grahamstown, Cape Colony, South Africa. They were the parents of at least 6 sons and 4 daughters. She lived in Council Bluffs, Pottawattamie, Iowa, United States in 1860 and Stoke by Nayland, Suffolk, England in 1861. She died on 20 April 1897, in Millville, Cache, Utah, United States, at the age of 79, and was buried in Millville City Cemetery, Millville, Cache, Utah, United States.

Put your face in a costume from Charlotte Elizabeth's homelands.

English: habitational name from any of various places, for example in Cheshire, Gloucestershire, Kent, and Lancashire, so named from Old English pōl ‘pool’ + tūn ‘enclosure, settlement’.