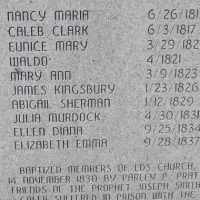 The Life Summary of Abigail Sherman

Put your face in a costume from Abigail Sherman's homelands.

On Halloween, tension between Cleveland and Ohio City began to boil over. Both sides of the river armed themselves with muskets and a cannon over the Columbus Street Bridge. These tensions were brought about because the bridge's location was diverting commercial attention away from Ohio City completely and the way that their concerns were being treated. Cleveland's mayor tried to reason with the enraged citizens but was greeted with a volley of rocks. No deaths were recorded but three men were injured.