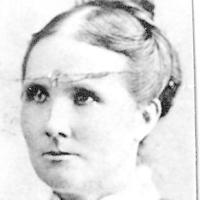 English: habitational name from a lost or unidentified place, probably in Lancashire. This English surname has been established in Ireland (Dublin) since the 14th century.English: variant of Starkin, itself perhaps from an unrecorded Old French personal name Starkin, a pet form of ancient Germanic names beginning in Stark- ‘strong’, such as Starc(w)ulf and Starcher, both of which appear in 1086 as names of Domesday Book tenants in East Anglia: Starcolf (Norfolk) and Starker (Suffolk). However, no medieval evidence for Starkin as a personal name or a surname has been found. An alternative possibility is a derivation from an unrecorded Middle English starking ‘strong one’ (see Stark ), but in the absence of any medieval evidence this is highly conjectural.Altered form of German Starke , written thus to preserve the second syllable.

She was born 6 August 1832 in Bloxwich, Staffordshire, England, the daughter of William Starkey and Hannah Perry. She was baptized into the LDS Church 15 April 1856 in England. She sailed from …