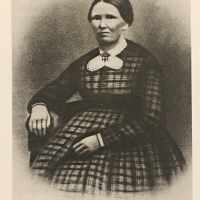 SARAH JANE PECK RICH There are those pioneer women who have told of their lives and who have written of their experiences and their names have become known, and they have been honored and rem …