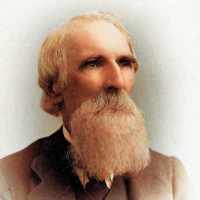 The Life Summary of Amos Pease

Put your face in a costume from Amos Pease's homelands.

Heritage - First To Join the Church