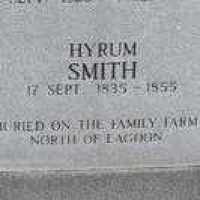 Text in Find a Grave

Son of William Orville Smith & Rhoda Hough Hyrum was engaged to marry Julia Ann Smith (no relation) when 10 days before their marrage Hyrum was killed by a horse. So in time Julia married Hyrum's bro …