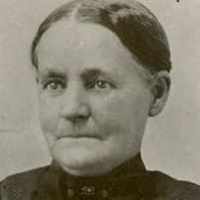 The Life Summary of Alice Eliza

When Alice Eliza Hardman was born on 29 July 1836, in Manchester, Lancashire, England, United Kingdom, her father, Richard Hardman Jr, was 29 and her mother, Margaret Holden, was 28. She married Joseph Nathaniel Perkins on 25 March 1856, in Salt Lake City, Salt Lake, Utah, United States. They were the parents of at least 3 sons. She lived in Utah, United States in 1870. She died on 2 January 1906, in Osmond Community, Lincoln, Wyoming, United States, at the age of 69, and was buried in Ogden City Cemetery, Ogden, Weber, Utah, United States.

Put your face in a costume from Alice Eliza's homelands.