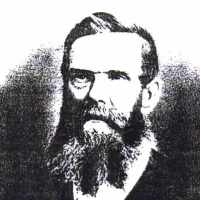 The Life Summary of George Bouncer

Put your face in a costume from George Bouncer's homelands.

English (Lancashire): patronymic meaning ‘son of Higgin’, in Lancashire a Middle English pet form of Hugh, but elsewhere probably also of Richard (see Hick ).History: The Higginson family of New England, which includes several prominent 17th and 18th century ministers and merchants, first appeared in America in 1629 with the Rev. Francis Higginson of Claybrooke, Leicestershire, England. He was a Puritan divine who emigrated to Salem, MA, in that year.

George Bouncer Higginson was born 11 August 1831 in Caynton House, Beckbury, Shropshire, England to Charles Wood and Mary Ann Bouncer Higginson. Reportedly, in 1850 at the age of 18, George was baptiz …