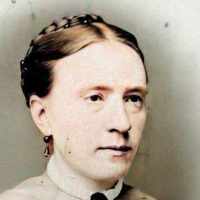 The Life Summary of Kari

When Kari Andersdotter was born on 2 February 1816, in Øvrebø, Lister og Mandal, Norway, her father, Anders Olsen Lie, was 21 and her mother, Steivor Andersdatter, was 21. She married Gunder Anderson on 3 July 1837, in Øvrebø, Vennesla, Vest-Agder, Norway. They were the parents of at least 5 sons and 6 daughters. She died on 19 March 1865, in Plain City, Weber, Utah, United States, at the age of 49, and was buried in Plain City Cemetery, Plain City, Weber, Utah, United States.

Put your face in a costume from Kari's homelands.