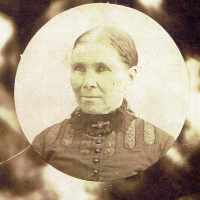 The Life Summary of Ane Marie

Put your face in a costume from Ane Marie's homelands.

Anna Marie Jensen was born 17 May 1835 in Karup, Hjorring, Denmark. She was the illegitimate daughter of Mariane Olsen and Christian Jensen. ANNA MARIE JENSEN CHRISTIANSEN by Donnetta Dalby Willis I …