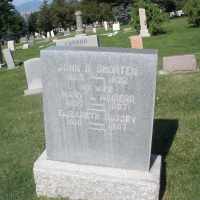 The Life Summary of John Bussey

When John Bussey Shorten was born on 2 February 1834, in Kings Worthy, Hampshire, England, United Kingdom, his father, Henry Chasteney Shorten, was 31 and his mother, Elizabeth Bussey, was 23. He married Marie Louise Winberg in 1858, in Lund, Malmöhus, Sweden. They were the parents of at least 1 son and 2 daughters. He lived in St George Hanover Square, Middlesex, England, United Kingdom in 1851. He died on 12 May 1922, in Salt Lake City, Salt Lake, Utah, United States, at the age of 88, and was buried in Salt Lake City Cemetery, Salt Lake City, Salt Lake, Utah, United States.

Put your face in a costume from John Bussey's homelands.

Irish (Cork): Anglicized form of Gaelic Seartáin, a variant of Soirtéil (see Shortell ).English (Norfolk): habitational name from Shorton in Paignton (Devon), and perhaps from one or more unidentified places. The Devon placename may derive from Old English scīr ‘bright, gleaming’ + dūn ‘hill’, but this cannot be certain due to a lack of medieval forms.

John was 20 years old & James was 14 years old, when they stayed at Devil's Gate, Wyoming to guard supplies that had to be left behind, in life threatening circumstances, of hunger, cold, danger of r …