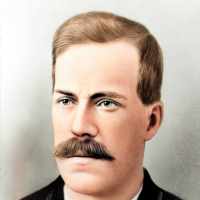 When John Henry Clarke was born on 9 April 1831, in Lambeth, Surrey, England, United Kingdom, his father, William Armstrong Clarke, was 30 and his mother, Rose Mary Bush, was 26. He married Elizabeth Heaver on 8 January 1854, in Westminster, Middlesex, England, United Kingdom. They were the parents of at least 3 sons and 7 daughters. He lived in Cache, Utah, United States for about 10 years. He registered for military service in 1856. In 1870, at the age of 73, his occupation is listed as post master in Oneida, Idaho, United States. He died on 25 May 1904, in Weston, Franklin, Idaho, United States, at the age of 73, and was buried in Weston City Cemetery, Weston, Franklin, Idaho, United States.