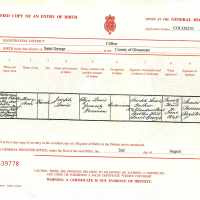 When Eliza Freeman was born on 27 September 1822, in Dursley, Gloucestershire, England, her father, Nicholas Heath, was 44 and her mother, Hannah Freeman, was 27. She married Joseph Lewis Sr. on 11 August 1844, in Wareham, Dorset, England, United Kingdom. They were the parents of at least 6 sons and 1 daughter. She lived in St Philips Marsh, Gloucestershire, England, United Kingdom in 1851. She died on 17 October 1857, in Council Bluffs, Pottawattamie, Iowa, United States, at the age of 35, and was buried in Florence, Douglas, Nebraska, United States.

Convinced that a group of Native American tribes were hostile, The United States formed a frontier militia to stop them in their tracks. Even though Black Hawk was hoping to avoid bloodshed while trying to resettle on tribal land, U.S. officials opened fire on the Native Americans. Black Hawk then responded to this confrontation by successfully attacking the militia at the Battle of Stillman's Run and then left northward. After a few months the militia caught up with Black Hawk and his men and defeated them at the Battle of Wisconsin Heights. While being weakened by hunger, injuries and desertion, Black Hawk and the rest of the many native survivors retreated towards the Mississippi. Unfortunately, Black Hawk and other leaders were later captured when they surrendered to the US forces and were then imprisoned for a year.
1 English: variant of Free .2 Irish: Anglicized (‘translated’) form of Gaelic Ó Saoraidhe ( see Seery ).3 In New England, an English equivalent of French Foissy ( see Foisy ).

[The following story is found in Ancestry.com and is attributed to "thompmj". He has a family tree in ancestry.com and his name may be Jackson_Thompson. THERE IS NO OTHER AUTHOR OR SOURCES LISTED-- …