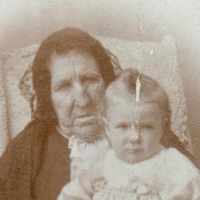 The Life Summary of Elizabeth Mead

Put your face in a costume from Elizabeth Mead's homelands.

English: from Middle English cheeke (Old English cē(a)ce), used as a nickname for someone with some deformity or scar in the region of the cheek or jawbone. Compare Cheak and Chick .

Jan 3, 1897 Mother states she was took with something like a stroke about nine years ago. When out at Sister Lucretia Robisons to dinner she was taken with cold chilly feeling and went home and duri …