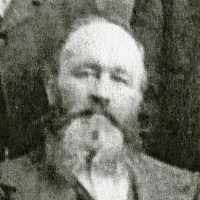 When Edward Harrison IV was born on 22 June 1834, in Cranwell, Lincolnshire, England, United Kingdom, his father, Edward Harrison III, was 27 and his mother, Mary Ann Law, was 18. He married Elizabeth Lee Holland on 30 October 1854, in Sheffield, Yorkshire, England, United Kingdom. They were the parents of at least 7 sons and 2 daughters. He lived in Rock Creek, Oneida, Idaho, United States in 1880 and Detroit, Wayne, Michigan, United States in 1880. In 1864, at the age of 30, his occupation is listed as boiler maker. He died on 24 June 1893, in Clifton, Franklin, Idaho, United States, at the age of 59, and was buried in Oxford Cemetery, Oxford, Franklin, Idaho, United States.