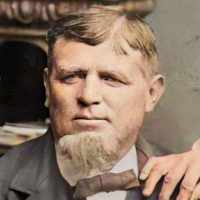 When Richard Pilling was born on 28 November 1833, in Waddington, Lancashire, England, United Kingdom, his father, John Pilling, was 37 and his mother, Peggy Bank, was 34. He married Catherine Adams on 10 March 1856, in Salt Lake City, Salt Lake, Utah, United States. They were the parents of at least 7 sons and 3 daughters. He lived in Great Mitton, Yorkshire, England, United Kingdom in 1841. In 1880, at the age of 47, his occupation is listed as farmer. He died on 28 December 1906, in Cardston, Cardston, Alberta, Canada, at the age of 73, and was buried in Aetna, Cardston, Alberta, Canada.