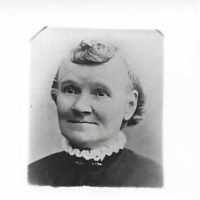 When Emily Argent was born on 4 February 1837, in Orsett, Essex, England, United Kingdom, her father, John Argent, was 35 and her mother, Mary Gridley, was 33. She married James Bateman on 29 September 1855, in Orsett, Essex, England, United Kingdom. They were the parents of at least 8 sons and 4 daughters. She lived in Utah, United States in 1870. She died on 19 August 1913, in Fremont, Idaho, United States, at the age of 76, and was buried in Central Cemetery, Jefferson, Idaho, United States.

English: from Old French argent ‘silver’, hence probably a nickname for someone with silver-gray hair, or possibly a metonymic occupational name for a silversmith or moneyer.

History of James and Emily Bateman (By their daughter Rose Andrus)

[Origional spelling and grammar] My father was born at Orsett, England, 19 March 1827. He had three brothers George, Alfred and John and one sister, Mary. His mother's name was Charlett Daliday. Th …