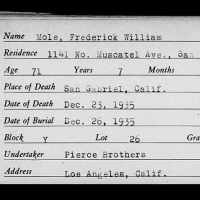 The Life Summary of Frederick W.

Put your face in a costume from Frederick W.'s homelands.

English: variant of Moll .French: metonymic occupational name for a knife grinder or a maker of whetstones, from a variant of meule ‘whetstone, grindstone, millstone’.Italian: variant of Mule .