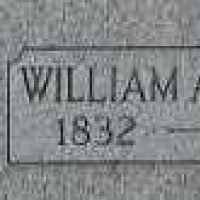 The Life Summary of William Adamson

When William Adamson McAuslan was born on 15 April 1832, in Kirkintilloch, Dunbartonshire, Scotland, United Kingdom, his father, Peter McAuslan, was 31 and his mother, Elizabeth "Betsy" Adamson, was 31. He married Mary Muir on 6 April 1853, in Ontario, Canada. They were the parents of at least 4 sons and 6 daughters. He died on 12 November 1896, in Hayward, Alameda, California, United States, at the age of 64, and was buried in Lone Tree Cemetery, Hayward, Alameda, California, United States.

Put your face in a costume from William Adamson's homelands.