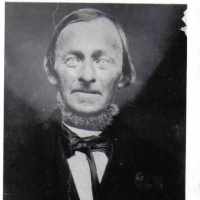 The Life Summary of Hans Heinrich

When Hans Heinrich Elliker was born on 26 February 1797, in Küsnacht, Zürich, Switzerland, his father, Henry Heinrich Elliker, was 30 and his mother, Elisabetha Schwengeler, was 32. He married Margaretha Studer on 24 July 1826, in Küsnacht, Zürich, Switzerland. They were the parents of at least 8 sons and 4 daughters. He immigrated to Liverpool, Merseyside, England, United Kingdom in 1856. He died on 20 September 1856, in Fort Bridger, Uinta, Wyoming, United States, at the age of 59, and was buried in Bridger, Uinta, Wyoming, United States.

Put your face in a costume from Hans Heinrich's homelands.

Hans Heinrich Elliker was born February 26, 1797, in Kuesnacht, Zuerich, Switzerland. He was the son and third child of Heinrich Elliker and Elisabeth Schwengler. He had a sister and brother older, …