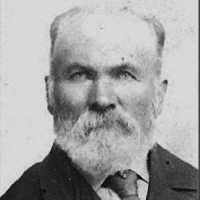 The Life Summary of Conrad

When Conrad Vaterlaus was born on 11 February 1835, in Berg am Irchel, Zürich, Switzerland, his father, Johannes Vaterlaus, was 42 and his mother, Anna Elisabetha B. Egg, was 39. He married Katherina Schmid on 13 November 1860, in Berg am Irchel, Zürich, Switzerland. They were the parents of at least 2 sons and 2 daughters. In 1880, at the age of 45, his occupation is listed as shoemaker in Paris, Bear Lake, Idaho, United States. He died on 9 July 1917, in Big Horn, Wyoming, United States, at the age of 82, and was buried in Cowley Cemetery, Cowley, Big Horn, Wyoming, United States.

The usual English spelling of Konrad, a Germanic personal name derived from kuon ‘bold’ + rad ‘counsel’. It was used occasionally in Britain in the Middle Ages in honour of a 10th-century bishop of Constance, but modern use in the English-speaking world is a reimportation from Germany dating mainly from the 19th century.