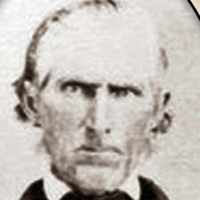 The Life Summary of Jonathan Harriman

Put your face in a costume from Jonathan Harriman's homelands.

THE CARTER ORPHAN'S INTRIGUING TIES TO JOSEPH AND EMMA SMITH.

As I (Cheryl Evans Fromm) was researching The John Sims Carter Family, there were so many intriguing forms of information. There exists John Sims Carter's own written words in a missionary journal (18 …