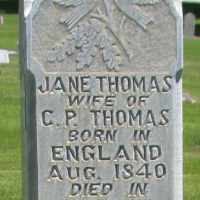 Third daughter of Ann Mapplebeck and William Miles of Ecclesall-Bierslow, a parish in Yorkshire, England. Both of Jane's older sisters died as infants in England and only she and her younger brother, …