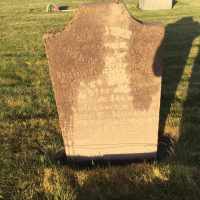 The Life Summary of Hannah Maria

Put your face in a costume from Hannah Maria's homelands.

History of my Sevy ancestors by Rhoda May

Great grandmother Sevy was Hanna Libbie, daughter of Simeon and Hannah Knowles Libbie. She was born in Porter, Oxford County, Maine, May 4, 1794, and died May 4, 1882. She married a Libbie and had o …