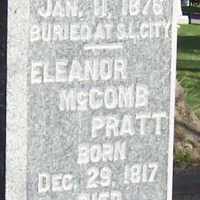 The Life Summary of Eleanor Jane

Put your face in a costume from Eleanor Jane's homelands.

The Treaty of Doak’s Stand was a treaty with the Choctaw which makes up the majority of Mississippi. It made it so the Choctaw had to give up one-half of their remaining homeland.