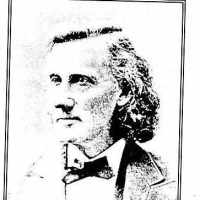 The Life Summary of John Farnham

When John Farnham Boynton was born on 20 September 1811, in Bradford, Haverhill, Essex, Massachusetts, United States, his father, Eliphalet Boynton, was 31 and his mother, Susannah Nichols, was 30. He married Susannah Lowell on 20 January 1836. They were the parents of at least 3 sons and 2 daughters. He died on 20 October 1890, at the age of 79, and was buried in Syracuse, Onondaga, New York, United States.

Put your face in a costume from John Farnham's homelands.

In 1819 a committee was appointed to settle on a name for this place. Syracuse was proposed by John Wilkinson because of the similarities he noticed between the description of ancient Siracusa in Sicily and the characteristics of this area; both had salt-water springs and a town to the north called Salina. The committee chose the name by unanimous vote.

English: habitational name from a place in East Yorkshire named Boynton, from the Old English personal name Bōfa + the connective particle -ing- denoting association + tūn ‘settlement’. Alternatively, the name may have arisen from Boyton in Wiltshire (recorded in Domesday Book as Boientone) or from Boyington Court in Kent (recorded in 1207 as Bointon), both of which are named with the Old English personal name Boia + tūn ‘settlement’.History: John Boynton emigrated from England to Salem, MA, 1638.