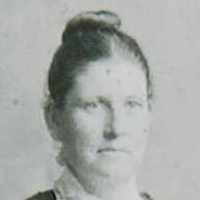 English: habitational name from any of the places in Lancashire and Yorkshire, so named from Old English mercels ‘boundary’ (see Mark 2) + denu ‘valley’ (see Dean 1), i.e. a valley forming a natural boundary.

I don't remember clearly the things my grandmother Baker told me about her father. If I find notes later I will enter them.

Put your face in a costume from Ann Eliza's homelands.