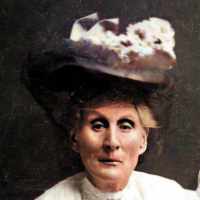 The Life Summary of Rosetta

When Rosetta Stringer was born on 23 November 1836, in Standon, Hertfordshire, England, United Kingdom, her father, William Stringer, was 37 and her mother, Elizabeth Stringer, was 28. She married John Pickett on 17 April 1855, in Chimborazo, Ecuador. They were the parents of at least 5 sons and 3 daughters. She died on 1 March 1920, in Gunnison, Sanpete, Utah, United States, at the age of 83, and was buried in Gunnison, Sanpete, Utah, United States.

The Life History of Rosetta Stringer

Rosetta Stringer was born on 23 November, 1836 at Standon, Hertfordshire, England. She was the daughter of William and Elizabeth Stringer. Rosetta's grandfather, Joseph Stringer had a fine industry of …