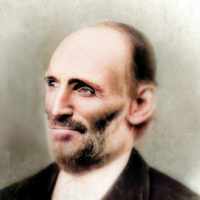 When John Pickett was born on 4 February 1825, in Much Hadham, Hertfordshire, England, United Kingdom, his father, John Pickett, was 33 and his mother, Susanna Sapsed, was 27. He married Rosetta Stringer on 17 April 1855, in Chimborazo, Ecuador. They were the parents of at least 5 sons and 3 daughters. He died on 27 September 1898, in Gunnison, Sanpete, Utah, United States, at the age of 73, and was buried in Gunnison Cemetery, Gunnison, Sanpete, Utah, United States.

John Jeremiah Pickett 1 September 1856 - 23 February 1929 Men are created that they may live for each other Fall is a beautiful time of the year to start your turn on earth. The flowers …