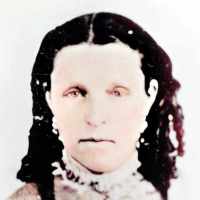 The Life Summary of Catherine Harriet

Put your face in a costume from Catherine Harriet's homelands.

The popular childhood rhyme "London Bridge is Falling Down" refers to the infamous overpass above the Thames River. By the 19th century the bridge had started to fall apart.

"John Fell Squires was the 2nd child of John Paternoster and Catherine Harriet Fell Squires. The family was converted to the LDS church in 1853 and left for America on the ship the International the s …