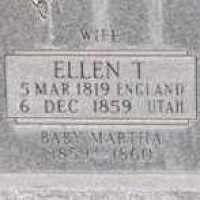 The Life Summary of Ellenor Rachel

When Ellenor Rachel Taylor was born on 5 March 1819, in Runcorn, Cheshire, England, her father, Joseph Taylor, was 53 and her mother, Mary Ellen Callis, was 46. She married Samuel Jefferson Cotterell on 4 April 1838, in Manchester, Lancashire, England, United Kingdom. They were the parents of at least 3 sons and 6 daughters. She lived in Manchester, Lancashire, England, United Kingdom in 1841 and Pottawattamie, Iowa, United States in 1850. She died on 6 December 1859, in Farmington, Davis, Utah, United States, at the age of 40, and was buried in Farmington, Davis, Utah, United States.

Put your face in a costume from Ellenor Rachel's homelands.